My step mom asked me to lighten her hair with peroxide and baking soda when she saw how well mine turned out! I kept track of measurements this time, partly since I would be doing her whole head, and partly since my peroxide and baking soda lightening post got so much traffic—I figured y’all would appreciate a recipe. 🙂 I also added conditioner to the mixture this time to make it more creamy and easier to apply.

I wound up using about two and a half batches for Tiff’s fairly thin, shoulder length, hair. I just mixed more as I needed it.

(Update 8/9/2012: In case you don’t make it down to the comments, Lisa shared a mishap she had while attempting this herself. “I’d like to warn anyone and everyone. Do not mix this in an enclosed container. I mixed it in a fruit smoothie blender. When I tried to take off the lid, it literally blew up. It made a huge POP and that stuff went everywhere. It was also very hot!!! Scared me so bad.” Whenever there’s a chemical reaction going on—in this case, what’s changing your hair color—there will often be a gas that leaves the mixture and can create pressure in a closed container. Be careful!)

Apply as you would any other hair dye/bleach. I started on the under side of her hair and worked my way toward her hairline doing small sections and paying close attention to her roots and the ends of her hair. We were using a barber’s cape, and placed an old towel on the floor below her to protect the rug, so I let the hair with the mixture applied hang down until Tiff’s whole head was finished. Then I wrapped it up in plastic wrap to avoid bleaching furniture or her shirt while she waited for her hair to process. We let it sit for an hour and did not apply heat. Do not to leave the mixture in for longer than an hour to avoid damaging your hair.

Cool Tip: I have heard that if you don’t do anything to it (no heat from flat irons, no hair dryers, etc.) for three days, your hair’s cuticle will seal up almost like new!

One more tip that I have to offer is to purchase some shampoo with a toner (like this one) in it that is made for blonde hair; this will keep it from getting too orange.

I think it turned out super cute! Something about lightening up your hair—especially the strands framing your face—makes your whole look seem more summery and alive. 🙂

I also have a better photo of how my hair turned out from the lightening (plus my lovely sister on the left and sooper dooper boyfriend on the right): 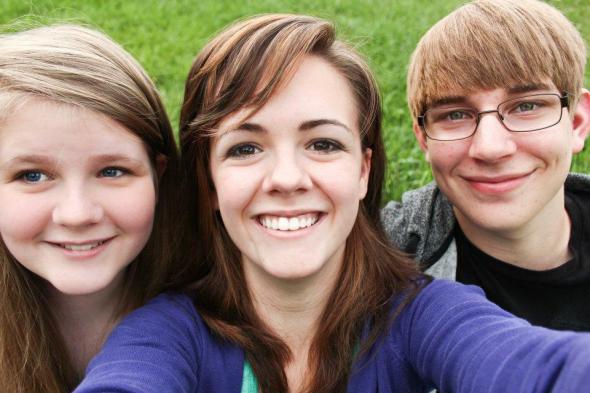 Again, please share your own lightening endeavors, and give me some feedback! 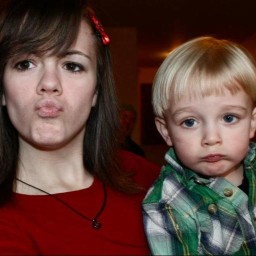